“I believe we stand at a turning point in history. For the first time, humans are no longer just affected by weather cycles, we are affecting those cycles—and suffering the consequences of doing so.”

Climate change is without a shadow of a doubt, one of the most pressing problems of the 21st century. It affects everything, from the air we breathe, to the water we drink, to the food we grow. And considering that natural fibers are the backbone of the textile industry, and climate change affects the growth and production of these natural fibers, it is only right that the textile industry makes this major global issue a priority.

Cotton production alone leaves a huge impact on the environment. According to Textile Today, a kilogram of cotton (the equivalent of one pair of jeans and one t-shirt) can take more than 20,000 liters of water to produce. Additionally, only 2.4% of the world’s crop land has cotton planted in it, yet it accounts for 24% of global sales of insecticide.

It’s not just the production of natural fibers that will affect the textile and apparel industry – the industry is known for being one of the most polluting industries of the modern world. The carbon footprint left behind by major textile operations is huge, and carbon is released throughout the supply chain,producing 1.3 billion tons of CO2 equivalent (CO2e) per year. Over 60% of textiles are used in the clothing industry and a large proportions of clothing manufacturing occurs in China and India, countries which rely on coal-fueled power plants, increasing the footprint of each garment. One way the industry can make positive changes is by switching to renewable energy, such as solar or wind power. This would drastically reduce the amount of energy consumed by factories and improve sustainability around the world.

“The apparel sector is one where there’s a lot of uncertainty about what exactly the impacts are,” said Nate Aden, senior fellow at the World Resources Institute, at a panel discussion on climate change in NYC.  “The best number we have now is about five percent of [global] greenhouse gas emissions [come from] the textile industry. To give you some sense of perspective, that’s about equivalent to the impact from the aviation sector, so all the planes flying in the world. Or in country terms, that’s about equal to Russia. So it’s pretty significant.”[1]

Fashion is one area in which consumerism has rapidly grown in recent years. Fast fashion has become more prevalent; clothing is produced on shorter timeframes with new designs appearing every few weeks to satisfy demand for the latest trends, but with this comes increased consumption and more waste. It has been estimated that there are 20 new garments manufactured per person each year[2] and we are buying 60% more than we were in 2000. Each garment is worn less before being disposed of and this shorter lifespan means higher relative manufacturing emissions.  Clothing costs have risen slower than those of other consumer goods, increasing their affordability, and there will be continued growth as the middle class expands and purchases increase to match this demographic shift. This combination of factors is expected to result in a tripling of resource consumption by 2050 (compared to 2000).

Synthetic fibers have seen rapid production growth since their introduction in the second half of the twentieth century. Polyester is now the most commonly used fabric in clothing, having overtaken cotton early in the twenty-first century. For polyester and other synthetic materials, the emissions for production are much higher as they are produced from fossil fuels such as crude oil. In 2015, production of polyester for textiles use results in more than 706 billion kg of CO2e. The authors of the study estimate a single polyester t-shirt has emissions of 5.5 kg CO2e, compared with 2.1 kg CO2e for one made from cotton. However cotton is a thirsty crop and its production has greater impacts on land and water.

With limited recycling options to recover reusable fibres, almost 60% of all clothing produced is disposed of within a year of production (ending in landfill or incineration)[3]. To put that into context, that is one rubbish truck per second to landfill[4]. It has been estimated that less than 1% of material used to produce clothing is recycled within the clothing industry, with around 13% recycled for use in other areas[5].

There is also a push to return to slow fashion, with higher quality garments with longer product life and utilization. The recent report from the Ellen Macarthur Foundation[6] advocates for a shift to a circular economy, where the value of products and materials is maintained for as long as possible and waste and resource use is minimized. This, alongside efforts to minimize negative environmental impacts from production, will create a more sustainable industry. For suggestions such as clothing rentals, and increased durability allowing reuse and resale, a shift in consumer behavior and attitude is required for them to gain traction.

A recent report by the Ellen MacArthur Foundation raised an alarm, pointing to an estimated USD 500 billion value lost every year due to clothing that is “barely worn and rarely recycled,” and which could lead to the industry accounting for a quarter of the world’s carbon budget by 2050.

Regarding cotton production, 1 kg of cotton production (equivalent to a pair of jeans and a t-shirt) can require nearly 5,500 gallons of water, 73% of global cotton harvest comes from irrigated land, 2.4% of the word’s crop land is planted with cotton and yet it accounts for 24% of sales 11% of insecticid and pesticides.(7)

The Aral Sea which was world’s fourth largest inland water lake has been reduced to 15% of its original size as a result of irrigation to cotton industry: 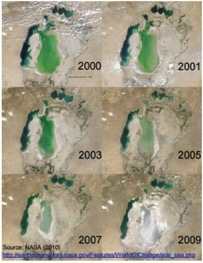 Another major polluting subsector of the textile supply chain is dyeing operations. All synthetic dyes and chemicals are hazardous to the environment. The wastewater from the dyeing industry is considered to be the most polluting of all given its volume and composition. Up to 200,000 tons of dyes are expelled in the form of effluent from dyeing and finishing operations due to inefficient processes.(8)  It is estimated that 20% of industrial water pollution globally is attributable to the dyeing and treatment of textiles.(9)

(1)   Bauck, W., “The Fashion Industry Emits as much Greenhouse Gas as All of Russia”,  Sept.22, 2017 HTTPS://FASHIONISTA.COM/2017/09/FASHION-INDUSTRY-GREENHOUSE-GAS-CLIMATE-CHANGE-SUSTAINABILITY