Researchers have come to a greater understanding of the multiple factors that influence obesity, which of course include our diet, but also our hormones, bio-individuality,  epigenetics and increasingly, the environment.  While lack of activity, poor diet, and genetics are frequently blamed for this problem, could there be other factors in the environment affecting our weight gain?

Many in the medical and exercise physiology communities remain wedded to poor diet and lack of exercise as the sole causes of obesity. However, researchers are gathering convincing evidence of chemical “obesogens”—dietary, pharmaceutical, and industrial compounds that may alter metabolic processes and predispose some people to gain weight.   Research in recent years has shown that an increase of chemicals in our diet , called obesogens, could be contributing to the obesity epidemic we are now facing.

Obesogens are a category of endocrine disruptors — chemicals that can interfere with your hormones. (1)

The Environmental Health Policy Institute (EHPI) states that certain endocrine disrupting chemicals affect how the body creates and stores fat, and which could be contributing to the current obesity  epidemic. There is a  growing list of obesogens: hidden chemicals that might be making your family gain unintended weight through a variety of means. Low doses of these endocrine disruptors can actually have a worse effects than high doses. So what are the actions and effects of these obesogens?

Some endocrine disruptors exert their effects by activating estrogen receptors, which can cause harmful effects in both women and men. Estrogen receptors are thought to be “promiscuous,” meaning that they will bind to anything that looks even remotely like an estrogen.  Some obesogens have not only been linked to obesity, but also to birth defects, premature puberty in girls, demasculinization in men, breast cancer and other disorders.

Unfortunately, many of these effects happen in the womb. For example, when pregnant women are exposed to these chemicals, their child’s risk of becoming obese later in life may increase. Obesity has risen steadily in the United States over the past 150 years, with a marked uptick in recent decades. In the United States today more than 35% of adults as well as 17% of children aged 2–19 years are obese.(2) Obesity plagues people not just in the United States but worldwide, including, increasingly, developing countries.  Even animals—pets, laboratory animals, and urban rats—have experienced increases in average body weight over the past several decades,(3) trends not necessarily explained by diet and exercise. In the words of Robert H. Lustig, a professor of clinical pediatrics at the University of California, San Francisco, “[E]ven those at the lower end of the BMI [body mass index] curve are gaining weight. Whatever is happening is happening to everyone, suggesting an environmental trigger.”

The idea that chemicals in the environment could be contributing to the obesity epidemic is often credited to an article by Paula Baillie-Hamilton, published in the Journal of Alternative and Complementary Medicine in 2002.(4) Her article presented evidence from earlier toxicologic studies published as far back as the 1970s in which low-dose chemical exposures were associated with weight gain in experimental animals. At the time, however, the original researchers did not focus on the implications of the observed weight gains.

The role of environmental chemicals in obesity has garnered increased attention in academic and policy spheres, and was recently acknowledged by the Presidential Task Force on Childhood Obesity and the National Institutesof Health (NIH) Strategic Plan for Obesity Research. “Over the past ten years, and especially the past five years, there’s been a flurry of new data,” says Kristina Thayer, director of the Office of Health Assessment and Translation at the National Toxicology Program (NTP). “There are many studies in both humans and animals. The NTP found real biological plausibility.” In 2011 the NIH launched a 3-year effort to fund research exploring the role of environmental chemical exposures in obesity, type 2 diabetes mellitus, and metabolic syndrome.(5)

The main role of fat cells is to store energy and release it when needed. Scientists also now know that fat tissue acts as an endocrine organ, releasing hormones related to appetite and metabolism. Research to date suggests different obesogenic compounds may have different mechanisms of action, some affecting the number of fat cells, others the size of fat cells, and still others the hormones that affect appetite, satiety, food preferences, and energy metabolism. Some obesogenic effects may pass on to later generations through epigenetic changes, heritable modifications to DNA and histone proteins that affect when and how genes are expressed in cells, without altering the actual genetic code.

Bruce Blumberg, a biology professor at the University of California, Irvine, coined the term “obesogen” in 2006 when he discovered that tin-based compounds known as organotins predisposed laboratory mice to gain weight.(6) “If you give tributyltin [TBT] to pregnant mice, their offspring are heavier than those not exposed,” he says. “We’ve altered the physiology of these offspring, so even if they eat normal food, they get slightly fatter.” (7) 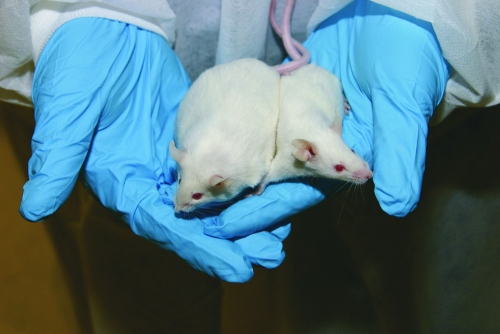 Human exposure and health-effect data are relatively rare for organotins, but studies have documented the presence of these compounds in human blood, milk, and liver samples. Although phased out as a biocide and marine antifouling agent, TBT is still used as a wood preservative and, along with dibutyltin, as a stabilizer in polyvinyl chloride; it pollutes many waterways and contaminates seafood.

Animal studies have also implicated another suspected obesogen: bisphenol A (BPA), which is found in medical devices, in the lining of some canned foods, and in cash register receipts – as well as in polyester fabrics. (8) “BPA reduces the number of fat cells but programs them to incorporate more fat, so there are fewer but very large fat cells,” explains University of Missouri biology professor Frederick vom Saal, who has studied BPA for the past 15 years.“In animals, BPA exposure is producing in animals the kind of outcomes that we see in humans born light at birth: an increase in abdominal fat and glucose intolerance.”(9)

Still another widespread obesogen is perfluorooctanoic acid (PFOA), a potential endocrine disruptor. “Pretty much everyone in the U.S. has it in their blood, kids having higher levels than adults, probably because of their habits. They crawl on carpets, on furniture, and put things in their mouth more often,” explains NIEHS biologist Suzanne Fenton. PFOA is a surfactant used for reduction of friction, and it is also used in nonstick cookware (i.e., Teflon), Gore-Tex™ waterproof clothing, Scotchgard™ stain repellent on carpeting, mattresses, and microwavable food items. In 2005 DuPont settled a class-action lawsuit for $107.6 million after its factory was found to have tainted  Parkersburg, WV  drinking water supplies with PFOA. (10)

Another obesogen is phthalates.  Phthalates are chemicals used to make plastics soft and flexible.  They are found in various products, including food containers, toys, beauty products, pharmaceuticals, shower curtains and paint.  They are in the vast majority of textile printing inks. These chemicals can easily leach out of plastics and contaminate foods, the water supply and even the very air we breathe.

A Swedish study found that children can absorb airborne phthalates from plastic floor material through the skin and respiratory tract.  In a study by the CDC, most Americans tested positive for phthalate metabolites in their urine (11).  Like BPA, phthalates are endocrine disruptors, affecting the hormonal balance in your body.

Phthalates may be contributing to increased susceptibility to weight gain by affecting hormone receptors called PPARs, which are involved in metabolism.  Studies in humans have shown that phthalate levels in the body are associated with obesity, increased waist circumference and insulin resistance.

Many of these obesogens – pesticides, BPA, PFOAs, Phthalates, TBTi, PCBs – are used regularly in textile production and they remain residual in the fabrics.  Phthalates were found in all the garments tested by Greenpeace (Greenpeace bought a range of clothing from 19 countries around the world) from 1.4 mg/kg to 200,000 mg/kg – or more than 20% of the weight of the sample.(12)