I’m going to be taking a few weeks off,  and thought I’d recycle some of our old posts.  So if you think you’ve seen these before – you have.   But the issues remain important and it doesn’t hurt to remind you.    I’ve updated the topics a bit if necessary.

Since the 1960s, the use of synthetic fibers has increased dramatically,  causing the natural fiber industry to lose much of its market share.  Polyester – especially recycled polyester – became the fabric of choice in the United States.   It was cheap, and oil was plentiful.  But with with dawning realization that the party might be over, polyester prices – and those of other synthetics – will reflect climbing oil prices, so the price of synthetics may equal those of natural fibers. 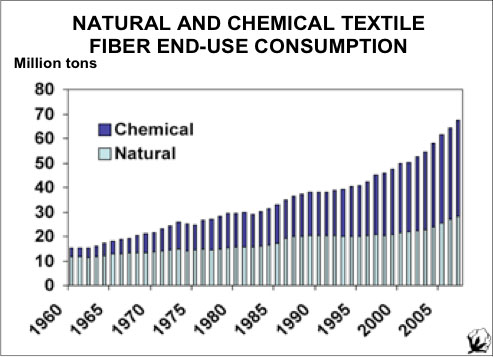 Natural fibers  have a history of being considered the highest quality fibers, valued for their comfort, soft hand and versatility.  They also carry a certain cachet:  cashmere, silk taffeta and 100% pure Sea Island cotton convey different images than does 100% rayon,  pure polyester or even Ultrasuede, don’t they?  And natural fibers, being a bit of an artisan product, are highly prized especially in light of campaigns by various trade associations to brand its fiber:

“the fabric of our lives” from Cotton, Inc. and merino wool with the pure wool label are two examples.

Preferences for natural fibers seem to be correlated with income; in one study, people with higher incomes preferred natural fibers by a greater percentage than did those in lower income brackets.   Cotton Incorporated funded a study that demonstrated that  66% of all women with household incomes over $75,000 prefer natural fibers to synthetic.

What are the reasons, according to the United Nations, that make natural fibers so important?  As  the UN website, Discover Natural Fibers says: