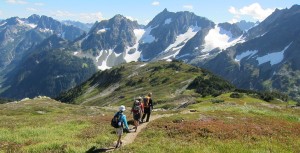 I’ll be taking a few weeks off so instead of sitting in front of the computer I’ll be hiking in the mountains and sitting by a lake. Have a wonderful fourth, and see you in August.

Last week I promised you the list of things to do to avoid toxins in your life. In putting together the list, it all became a bit overwhelming and I found myself asking whether it would really make a difference. I mean, the chemicals in use are so pervasive and ubiquitous that I wasn’t sure whether my puny attempts at reducing exposure would result in any improvements. Like that old adage: you can’t buy health – can you protect yourself from exposure? I mean, they found GMO wheat in a remote field in Oregon. Then I ran across the Michael Pollan piece in the New York Times (for the full article, click here) in which he talks about what we can do to fight climate change and it seems to reflect my own feelings about chemical exposure:

Why bother? That really is the big question facing us as individuals hoping to do something about climate change, and it’s not an easy one to answer. I don’t know about you, but for me the most upsetting moment in “An Inconvenient Truth” came long after Al Gore scared the hell out of me, constructing an utterly convincing case that the very survival of life on earth as we know it is threatened by climate change. No, the really dark moment came during the closing credits, when we are asked to . . . change our light bulbs. That’s when it got really depressing. The immense disproportion between the magnitude of the problem Gore had described and the puniness of what he was asking us to do about it was enough to sink your heart.

But then he answers his own question: “Going personally green is a bet, nothing more or less, though it’s one we probably all should make, even if the odds of it paying off aren’t great. Sometimes you have to act as if acting will make a difference, even when you can’t prove that it will.”

The fact that chemicals are not being directly linked to health issues is largely because of the long delay between time of exposure and effect, so causation is difficult to prove. As Ed Brown points out in his new documentary “Unacceptable Levels” (click here for more information), it’s only because these chemicals have been in our environment for so long that we can now start to monitor their results. Another reason it’s difficult to prove the effects of these chemicals is that we’re exposed to low levels of individual chemicals from different sources – and they enter your body and react with all the other chemicals found there. Yet chemicals are tested for safety only one by one. As Ken Cook points out, no doctor will prescribe a new drug for a patient before finding out what other drugs that patient is taking.

So, yes, it’s overwhelming but that’s okay. Now that you know, begin to read up a bit and learn what all the fuss is about. Then you can start to make some changes that might mean all the difference.

Back to my list: my top 11 suggestions to avoid toxins are below. If you can do even some of those, you’ll be ahead of the game:

• Take off your shoes in the house – simple and easy, and it prevents lots of pesticides and other chemicals from being tracked in.

• Vacuum and/or dust regularly –because the dust in our homes has been proven to contain lots of chemicals (want proof? click here )

• Filter your water. You’d be surprised to read the list of really bad chemicals found in most tapwater in the US – if you’re interested, read the series called “Toxic Waters” which was published in the New York Times. Click here.

• Buy only GOTS or Oeko Tex certified fabrics if you can – for everything, not just sheets and pajamas – starting now. Never buy wrinkle-free or permanent-press anything and pass on any stain protection treatments. Fabrics – even those made of organic cotton – are, by weight, 27% synthetic chemicals. Click here to get started on what that means!

• Check the labels on your furniture. The California Furniture Flammability Standard essentially requires that cushioned furniture, children’s car seats, diaper-changing tables and other products containing polyurethane foam be drenched in flame retardants – and most manufacturers build to that standard, so don’t think you’re off the hook just because you don’t live in California. (Click here to read why that’s important). Check the labels on electronics, too. Avoid polyurethane if possible.

• Read the labels of your grooming products – avoid anything that includes the words “paraben” (often used as a suffix, as in methylparaben) or “phthalate” (listed as dibutyl and diethylhexyl or just “fragrance”). If there isn’t an ingredients list, log on to cosmeticsdatabase.com, a Web site devised by the Environmental Working Group that identifies the toxic ingredients of thousands of personal-care products.

• About plastics: Never use plastics in the microwave. Avoid “bad plastics” like PVC and anything with “vinyl” in its name. And don’t eat microwave popcorn, because the inside of a microwave popcorn bag is usually coated with a chemical that can migrate into the food when heated. It has been linked to cancer and birth defects in animals.

* As Michael Pollan says: “Eat food. Not too much. Mostly plants.” I’d add: eat organic as much as possible, support local farmers and don’t eat meat and fish every day. Grow an organic garden – one of the most powerful things you can do! If you can only purchase a few organic foods, there are lots of lists (EWG has a good one, click here) that tell you which are the most pesticide-laden.

• Replace cleaning products with non toxic alternatives – either commercially available cleaning products (avoiding ammonia, artificial dyes, detergents, aerosol propellants, sodium hypochlorite, lye, fluorescent brighteners, chlorine or artificial fragrances) or homemade. You probably can do most cleaning with a few simple ingredients like baking soda, lemon juice and distilled white vinegar. Lots of web sites offer recipes for different cleaners – I like essential oils (such as lavender, lemongrass, sweet orange, peppermint, cedar wood and ylang-ylang) in a bucket of soap and hot water. It can clean most floors and surfaces and it won’t kill me.

• And now that we mention it, avoid using any product which lists “fragrance” as an ingredient.

• Fly less – in this case my issue is not with the carbon footprint (which is tremendous) but because the fabrics are so drenched in flame retardants that people who fly often have elevated levels of PBDEs in their blood – and you already know that PBDEs and their ilk are to be avoided as much as possible (click here and here ).

• Get involved and become informed! Force the federal government to fulfill its obligation to protect us from harm – join something (like a Stroller Brigade, sponsored by Safer Chemicals, Healthy Families or Washington Toxics Coalition, for example) and urge your representatives to support the Safe Chemicals Act.

10 thoughts on “What you can do to avoid toxins”