The first plastic garbage bag was invented by Harry Waslyk in 1950.

1950!  Mr. Waslyk could not have predicted how much havoc his plastic child would wreck in a mere 62 years.[1]

We’ve all seen the pictures of birds stomachs filled with plastic detritus and read about the Great Pacific Gyre, but I just read a new twist to that story:    the Emirates News Agency reported that decomposed remains of camels in the desert region of the United Arab Emirates revealed that 50% of the camels died from swallowing and choking on plastic bags.  “Rocks of calcified plastic weighing up to 60 kilograms are found in camel stomachs every day,” said Dr. Ulrich Wernery, Scientific Director, Central Veterinary Research Laboratory in Dubai, whose clinic conducts hundreds of post-mortems on camels, gazelles, sheep and cows in the UAE.  He adds that one in two camels die from plastic.[2]

Plastic has become so ubiquitous, in fact, that plastics are among the debris orbiting our planet. Unfortunately, our wildlife and domestic animals are paying the price now; I think we ourselves will see changes in future generations.

It’s no wonder we’re scrambling to find alternatives to plastic, and one hot topic in the research area is that of bioplastics.

Bioplastics are made (usually) from plant materials.  Enzymes are used to break starch in the plant into glucose, which is fermented and made into lactic acid.  This lactic acid is polymerized and converted into a plastic called polylactic acid (PLA), which can be used in the manufacture of products  ( PLA is about 20% more expensive than petroleum-based plastic)  or into a plastic  called polyhydroxyalkanoate, or PHA (PHA biodegrades more easily but is more than double the price of regular plastic). 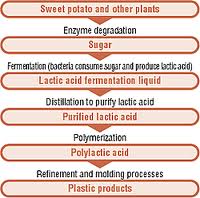 The bioplastic market is expanding rapidly and by 2030, according to some estimates, could account for 10% of the total plastics market.   In the world of fabrics and furnishings, the new biotech products which are being heavily promoted are Ingeo and Sorona, both PLA based fibers with a growing share of the fabric market; and soy-based foam for upholstery.    Toray Industries has announced that they will have the first functional performance nylon and polyester textiles based on biomass ready for the 2013/14 season.  They are 100% bio-based fabrics [3] based on the castor plant, which is very robust, growing in dry farming areas and requiring significantly fewer pesticides and herbicides than other crops.

So it’s no wonder that there has been much discussion about bioplastics, and about whether there are ecological advantages to using biomass instead of oil.

The arguments in favor of bioplastics are:

These arguments sound pretty good – until you begin to dig  and find out that once again, nothing is ever as simple as it seems.

Regarding the first two arguments (they are good for the environment because they produce significantly fewer CO2 emissions and less energy) –  there have not been many studies which support  this argument until recently.  Recently,  several  studies have been published which seems to support that  this is indeed the case:

So I will accept the arguments that biobased plastics produce fewer  greenhouse gases and harmful carbon emissions and require less energy to produce than petroleum-based plastics .  They also certainly reduce our dependence on foreign oil.

Next week we’ll take a look at the arguments against bioplastics.