It’s the holiday season – and that usually means gifts.  I have begun the annual frenzy  and I’m watching my budget – yet I wince each time I hear an ad for an even cheaper price.  I’m especially worried by the Old Navy ads for really cheap cashmere sweater.  (Click here to read our blog post on cashmere and how it’s affecting our environment.)  My gifts are often jeans or clothing for my three boys, and so the Greenpeace report which was just published on November 30 really hit home.

As the Greenpeace web site   http://www.greenpeace.org/eastasia/press/release/textile-industrial-pollution tells it:

“Xintang is better known as the “Blue Jeans Capital of the World” – over 40% of its jeans are exported to the US, the EU, Russia and many other countries. It produces 260 million pairs of jeans annually, or more than 60% of China’s total jeans production and equivalent to 40% of all the jeans sold in the US each year.

Students on Street These students on their way to school try to block out the fumes from trash incineration Gurao, 06/08/2010 © Qiu Bo / Greenpeace

Meanwhile, 80% of Gurao’s economy is related to the underwear and lingerie industry. Each year, the “Capital of Sexy” produces 200 million bras, enough for one for every third woman in China.

“Xintang and Gurao are symbols of success in China’s export-model economy, yet we were horrified by the environmental degradation we saw during our fieldwork visits from April to September,” said Greenpeace Toxics campaigner Mariah Zhao. “Though we cannot pinpoint the pollution sources definitively at this stage, it’s worth noting that textile is the dominant industry in both towns by a long run.”

Testing by an independent laboratory revealed heavy metals such as copper, cadmium, and lead in 17 out of 21 samples of water and sediment from Xintang and Gurao. One sediment sample from Xintang contained cadmium at concentrations 128 times in excess of national environmental standards. “Dyeing, washing, bleaching, and printing are some of the dirtiest processes in the textile industry, requiring high volumes of water as well as heavy metals and other chemicals,” explained Zhao. “And Xintang is home to the complete blue jean manufacturing process, including dyeing, bleaching, and washing.”

Workers in the industry also testified to Greenpeace. “The water is discharged from the dyeing factories upstream. Sometimes it smells really awful. And every time the color of the water is different,” said Ren Shan (pseudonym), a migrant worker who moved to Gurao for a job in a textile factory. 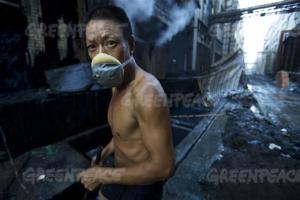 Worker in GuangDong Every morning, workers at a denim washing factory must search through wastewater to scoop out stones that are washed with the fabric in industrial washing machines to make stonewash denim. Xintang, 08/14/2010 © Qiu Bo / Greenpeace

“With China nicknamed ‘the Factory of the World,’ it’s important to remember that Xintang and Gurao are emblematic of the larger problem of dirty textile manufacturing – they are just two of 133 textile industrial clusters in the country,” Zhao pointed out. “The responsibility of wastewater regulation and phasing out hazardous chemicals in textile manufacturing must be faced by not only Xintang and Gurao’s industries and government, but also throughout China.”

“Jeans and bras are synonymous with a modern, sexy lifestyle, yet we need to think about what these fashion icons mean for our environment. With many people demanding new jeans and clothing every year, it is imperative that the textile industry implements clean production methods, starting by phasing out the use and release of hazardous chemicals. At the same time, the government must adopt and enforce strict hazardous chemical management policies,” said Zhao. “We also hope that consumers will join us in pushing for change from the government and their favorite clothing companies. It would be tragic if fashion and economics comes at the cost of China’s clean water resources.” “

While you all ohh and ahhh about the terrible conditions in these Chinese cities– and of the chemicals being dumped into our groundwater – remember what motivates this behavior.  As we (you and I) push for ever lower prices, the factories have no recourse but to cut costs – by paying lower wages, (if wages are paid at all) and ignoring pollution control measures (which are expensive and force the cost up).

It is a simple equation that, if retailers want cheap prices and fast delivery times, they cannot expect high wages and comfortable working hours for the people on the production line, nor can they put in place expensive pollution control measures such as water treatment.

Somewhere there has to be a compromise.  In fact,  Ellen Ruppel Shell, in her book, “Cheap, The High Cost of Discount Culture”, asks: “What are we really buying when we insist on getting stuff as cheaply as possible?”  Her answer:  a low-quality food supply, a ruined economy, a polluted environment, low wages, a shoddy educational system, deserted town centers, ballooning personal debt, and the loss of craftsmanship.

3 thoughts on “The High Cost of Low Prices”