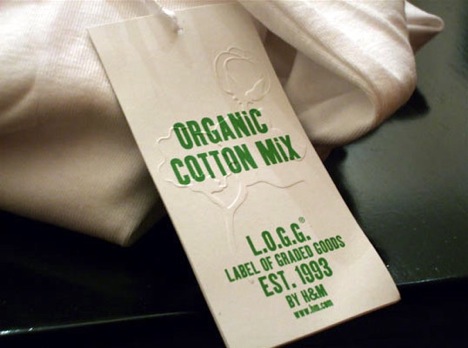 A recent report in The Financial Times of Germany alleged  that a ‘gigantic fraud’ was taking place in the sale of cotton garments marked as organic by leading European retailers like H&M, C&A and Tchibo, because they actually contained genetically modified (GM)  cotton.   GM cotton (often called Bt cotton in India) is prohibited in organic cotton.  The source of fabrics, it said, was India.
Interestingly, the paper quoted Sanjay Dave, director of Apeda (Indian Agricultural and Processed Food Products Export Development Authority), as saying that the fraud was on a large-scale and that two European certifying agencies had been fined for lax processes.  Lothar Kruse, director of the laboratory which ran the tests, was quoted as saying that around 30% of  organic cotton samples from India  were found to be contaminated with GM cotton.   There were charges and countercharges by all involved – and Indian organic cotton has become suspect.  How did this happen?

In August, 2009, the Indian Ministry of Textiles took several initiatives to strengthen their textiles industry  —  among them was a commitment to “safeguard and promote” organic cotton.  Organic cotton had become an important crop in India:  according to the Organic Exchange, India accounted for about 65% of all the organic cotton produced worldwide in 2008-09, making India the No.1 producer of organic cotton in the world. And since the global market for organic cotton is growing by as much as 150 per cent per year (based on 2008-09 figures) its make sense for India to support organic cotton where it is already a market leader in a product for which an assured market exists and is growing.

And yet at the same time, the Indian government (through the Department of Biotechnology of the Ministry of Science and Technology) is supporting and promoting genetically modified cotton.  India allowed the commercial cultivation of genetically modified (GM) cotton in 2002, and by 2006, GM cotton accounted for 42% of the total Indian cotton crop. This makes India the country with the largest area of GM cotton in the world, surpassing China.  According to Reuters,  Indian farmers will grow genetically modified cotton on 90 % of the area under cotton cultivation by 2012.  See our blog posts on GMO crops:  Reasons for concern regarding GMOs and GMO Cotton.

Organic cotton  and genetically engineered cotton are mutually self-excluding commodities –  organic cotton prohibits the inclusion of any genetically engineered cotton.  So the Indian government is bumbling in two contradictory directions at the same time.  There have been warnings from opponents of genetically engineered crops that if GM cotton were to contaminate traces of organic cotton, the consignments of organic cotton would lose the certification that gets them a premium price advantage and be rejected by markets interested in buying organic cotton.  Organizations such as Gene Watch (UK) and Greenpeace have warned that it is impossible to keep agricultural produce like cotton or rice or strawberries apart once they are ready for the market.  These organizations also maintain a register of instances where genetically engineered crops have contaminated conventional or organic crops. The contamination cases run into hundreds across the world, often with grave economic consequences. Not so long ago, consignments of US rice exported to several countries had to be recalled because traces of GM rice was found in rice that was declared as conventional, non GM rice. The cost of recall was prohibitive but the greater damage was done to America’s future rice exports. Once countries returned the contaminated US rice, other rice exporting nations like Thailand entered the newly available markets in Europe, Japan and South Korea and established themselves there.

And the warnings by Gene Watch and Greenpeace have just come true in the form of the scandal which broke in January, 2010 based on  the report in the German edition of Financial Times

This casts a cloud over all exports of organic products from India, of which cotton is the leading item.

But in all this uproar, who is losing the most?  Once again it’s the small farmer in India.   The African proverb that when two elephants fight, it’s the grass that suffers, is certainly true in this case.

A bit of history:  The Indian government, in a desperate bid to promote the uptake of GM seeds, banned traditional seed varieties from many government seed banks in 2002  and allowed Monsanto to sell their new seed creations.  In return for this access, India was granted International Monetary Fund loans.

Because the family livelihood of Indian farmers depends entirely on good decisions being made, they often seek advice or take a lead from someone she/he thinks knows best. The average farmer is illiterate and ignorant of the implications of planting a GM crop, but lives in the hope that money borrowed to produce a cash crop will be more than repaid after a good harvest.   Monsanto began advertising the new GM seed heavily;  it was pervasive, with utterly misleading claims,  emanating from  celebrities, government officials, journalists, agricultural and corporate scientists, larger landowners and seed dealers who had either jumped on the media bandwagon or had vested interests in GM cotton sales. Bollywood personalities such as Nana Patekar attributed almost miraculous powers to the product on TV. Punjab Chief Minister Amrinder Singh  personally endorsed the Bollgard brand (one of Monsanto’s GM seed varieties sold in India). Local opinion leaders such as larger landowners received seed and pesticide discounted or free, and ‘poor farmers’ who extolled the virtues of GM cotton locally  turned out not to be farmers at all.

In the past, if a crop failed, the farmer could use his seed from prior years to replant his crop.  But with GM seeds they could not do this, because the seeds contain “terminator technology” meaning that the crops do not produce viable seeds of their own.  So farmers must buy seeds each year – at punitive prices:  GM seed costs about $15 for 4 ounces of seed, compared to $15 for 4,000 ounces of traditional seeds.

Farmers are also desperate to avoid the spiraling cost of pesticides, and were taken in by GM cotton advertising and Monsanto’s extravagant claims. For example, at the point of sale, when farmers are vulnerable, seed dealers  hyped up the yield of a hypothetical farmer’s GM cotton (based on Monsanto claims that yields are 30 – 40% higher than conventional hybrid seed) because the seed dealers profit is four times greater per drum than for non GM seed.  In addition,  Monsanto claims pesticide use will be 70% less because their Bollgard variety is supposed to  kill 90% of bollworms.

This perfect storm led to widespread adoption of GM seeds by Indian farmers.  But the promises made by Monsanto have proven to be false over time: GM cotton required double the amount of water that non GM varieties required (proving to be a matter of life and death for many),  many crops have been devastated by bollworms and there have been widespread crop failures.  (read  more here ).   Farmers, beguiled by  promises, incurred debts that they could not repay.  Thousands of farmers, according to the Mail Online in November, 2008, “are committing suicide”.  The crisis, branded the ‘GM Genocide’ by campaigners, was highlighted recently when Prince Charles claimed that the issue of GM had become a ‘global moral question’ – and condemned ‘the truly appalling and tragic rate of small farmer suicides in India, stemming… from the failure of many GM crop varieties’.
Read more here and here.

Many organizations have been trying to convert Indian farmers to organic practices –  “desperate times call for organic measures”.  The fact that farmers don’t have to spend money on pesticides and fertilizers coupled with the premium of 15 – 20% over conventional cotton that organic cotton commands in the marketplace has helped convince many farmers that organic agriculture is worth a try.   Yet now  organic cotton from India has been reported to be contaminated with GM cotton, leading many to cry fraud.

This was not unforeseen:  drift or contamination of GM with non-GM crops has long been a concern, especially now that 65-75% of total cotton production is made up of  GM cotton.  According to P.  Gouri, adviser on organic products to Apeda,   “measures to prevent contamination through strict implementation of a 50-meter refuge (buffer zones around farms growing GM cotton to prevent the pollens from contaminating neighboring farms) are absolutely essential.  If GM farming practices are regulated strictly, we can keep contamination at manageable-levels, specially if farmers use non-cotton as a buffer.”  Yet,   there have been  many violations of biosafety regulations; in addition there are no standards for the permissible amount of contamination in organic cotton.    Nobody is addressing the problem of gene transfer to conventional plants; and a general disregard of separation distances between the GM and non-GM crop makes contamination a fait acompli . Similarly, there is a general lack of enforcement of 20 percent non-GM refugia, designed to slow the evolution of pest resistance. The several generations of bollworm that live annually on a crop can lead to 60 percent resistance in a single year.

According to the Human Genome Project, the act of genetically modifying something like organic cotton has its own ripple effect from the potential environmental impacts of unintended transfer of trans genes through cross-pollination and unknown effects on other organisms (e.g., soil microbes), to the loss of flora and fauna biodiversity.  With no regulation of GM cotton, GM produce is entering our food and feed chain as cottonseed oil and cake.  (Did you know that we eat more of the cotton crop than we wear?)  Genetically engineered cotton has all kinds of stuff we’ve never eaten before: viral promoters, antibiotic-resistant genes, special bacteria.  Organic food producers are very concerned. This problem will continue to grow as fourteen new GM varieties of India’s staple crops were approved for field trials that began in 2005.

Currently, India and her customers rely on third party certifying agencies, such as Control Union, to substantiate organic claims.  Certification is being done as per GOTS, or Global Organic Textile Standards, but India is formulating its own standards. The biggest innovation is TraceNet, a web-based traceability system that has been introduced in the country, to trace and track all organic certifications for exports to ensure purity.   Inspectors employed by certification agencies will use GPS devices for capturing data so that wrong certifications are eliminated.