Chris Wood – an independent journalist living on Vancouver Island, Canada,  wrote an article in Miller-McCune about China’s cotton problem.   Most of the information here is taken from his article.  You can read the complete article here.

Clients often ask us where our fabrics and/or fibers come from because, they tell us,  they don’t want to buy something if it 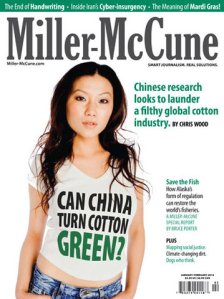 was made in China because they don’t want to support China’s horrible environmental reputation.

Well, first we’d like to say that China is a big place, and to say anything pertains to all of China is really stretching it.  And our experience has been quite the opposite – our contacts in China are among the most caring and environmentally sensitive, and now there’s evidence that the Chinese government is making efforts to support sustainability in this area also.  China’s Development Research Center (DRC) Deputy Director Long Guoqiang has said that  “sustainable trade means economic, social and environmental sustainabilities. In the past, China [judged] the former two more important than the latter one. In recent years the environmental target has become more and more important. We think the three targets are equally important to China at this stage.”

China,  cotton, and the United States  is a complicated threesome.  Not only does China provide the U.S.  more than $30 billion worth of textiles and clothing, China is the #1 foreign customer for American-grown cotton. And to further complicate this relationship, cotton is one of the world’s major agricultural commodities:  if we take into consideration all stages of  the cotton life cycle, cotton is the economic support for one-sixth of humanity.  It’s also implicated in a wide array of environmental issues, from falling aquifer levels in regions growing irrigated cotton to fertilizer runoff that nourishes fish-killing algae blooms in lakes and oceans and to pesticide contamination of groundwater.

In China, it costs money to treat textile effluent just as it does in other parts of the world.  It’s not costless.   The search for lower prices – an effort to stay profitable –  has led to cost cutting.   The Miller McCune story published the claim that almost one third of the dye effluent in China is discharged without any attempt to treat it – in some areas, the water is dangerously toxic to the touch.   This is one of the major factors in the unavailability of clean drinking water for large sections of Chinese society.  One official in China said that in 2006, the cumulative cost of environmental damage and pollution-related health care was effectively offsetting the country 10% annual economic growth. 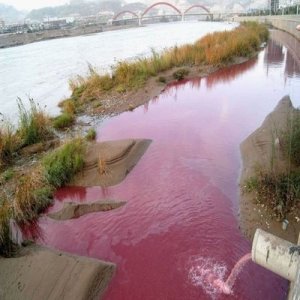 And the Chinese government is not blind to this environmental degredation, nor to the scale of the pollution drag on the Chinese economy.  So the State Council directed its research arm, the Development Research Center (DRC), to seek advice on bringing the trade vital to China’s prosperity into balance with its ecological resources.  The DRC, in turn, commissioned a Canadian research center to oversee an international network of experts, to look into these problems and to help them envision a sustainable trade strategy.  The Chinese government was looking for pragmatic solutions.

But what it all boils down to is that despite China’s authoritarian government (which some say can get things done quickly once they’ve identified the path),  despite its efforts to bring the industries which are the engine for its prosperity into ecological balance, and despite the government’s efforts to identify the textile industry’s full-spectrum impact, cradle to grave, the bald truth is this:   textile products and clothing in particular are horribly undervalued.   The prices consumers are prepared to pay – or more accurately, the prices the high volume brands are willing to pay for product inputs – encourage producers to do simply what they can afford, rather than what is right.   The global cotton-textile value chain is “buyer driven”, dominated by a relatively small number of increasingly global participants.  In the U.S. market just two large discount chains – Wal-Mart and Kmart – account for 1/4 of all the clothing sold.  I wince every time I see Old Navy’s advertisements with their unbelieveably low prices for clothing – because I know what those prices mean to me in the long run.   “[I]f the true environmental costs can be included in the price of products and services,” the researchers argued, “the pricing system can give market signals that ensure the efficient allocation of environmental resource use.”

Taxes on such things as wastewater discharge, on cotton clothing to fund recycling, and tax incentives to motivate adoption of wastewater recycling have all be suggested.  But there is only so much the government can do.  Local authorities can’t afford for local businesses to close down –  and so we have a problem the the world can’t afford to ignore.

Another significant impediment, according to Chris Wood’s article,  to greater sustainability for China’s cotton trade lies in the difference between  “cotton production in the nominally communist state and its production in supposedly capitalist America. While U.S. production is dominated by heavily mechanized, industrial-scale farms, and China’s cotton is overwhelmingly grown on much smaller parcels tended by hand, it’s the large American cotton farms that are arguably the more socialized. China’s millions of small cotton farmers are highly exposed to the vagaries of the market; the United States subsidizes its growers by amounts that in some years exceed the harvested value of their crops. Such subsidies in the U.S. and countries in Europe and elsewhere (including China itself) depress the price of globally traded cotton, leaving small producers with little profit to invest in better growing techniques.”

But turn the American subsidies on it’s head, and look at the situation from another angle:  American taxpayers’ willingness to pick up much of the cost of its water- and chemical-intensive cotton crop keeps the price of U.S. cotton  irresistibly low to Chinese buyer, encouraging more of the same.  And American taxpayers will pay the piper when the water runs dry and the health concerns blossom into realities.

One thought on “Cotton and China”