Last week we talked about the importance of livestock management in the battle against climate change.  It came as a real revelation to this city girl that large grazing animals are a vital and necessary part of the solution to climate change.   Sheep can actually help to improve soils, which improves the soil’s ability to absorb water and maintain its original nutrient balance – and most importantly, by increasing the organic matter in the soil, it makes the soil a highly effective carbon bank. 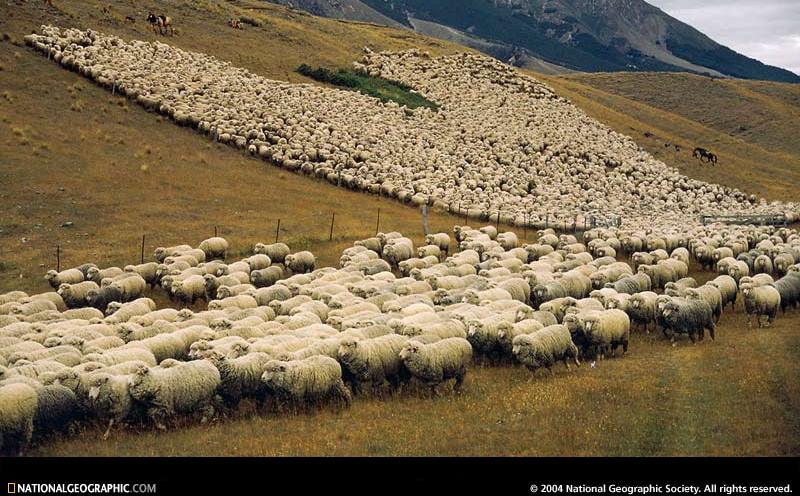 So the management of the livestock can be beneficial – but it’s a long way from a sheep in the pasture to a wool fabric.  So let’s look at the wool produced by these sheep and examine  what “organic wool” means.

In order for wool to be certified organic in the U.S., it must be produced in accordance with federal standards for organic livestock production, which are:

A key point to remember about the USDA and OTA organic wool designations:  the organic certification extends only to livestock – it doesn’t  cover the  further processing of the raw wool. Should that be a concern?

Wool as shorn from the sheep is known as greasy (or raw) wool. Before it is suitable for further processing it must be washed to remove dirt, water soluble contaminants (called suint), and woolgrease – and there are a lot of these contaminants.  On average, each ton of greasy wool contains:

This process of washing the wool is known as scouring.  Scouring uses lots of water and  energy :

What about the chemicals used?

Detergents used in wool scouring include alkylphenol ethoxylates (APEOs) or fatty alcohol ethoxylates (more benign); sodium carbonate (soda ash), sodium chloride and sodium sulphate.  APEOs are among those chemicals known as endocrine disruptors – they interfere with the body’s endocrine system   They’re known to be very toxic for aquatic life – they cause feminization of male fish, for example.  (Click here to see what happened to alligators in Florida’s Lake Apopka as a result of endocrine disruptors traced to effluents from a textile mill. )  More importantly they break down in the environment into other substances which are much more potent than the parent compound.  They’re banned in Europe.

The surface of wool fibers are covered by small barbed scales. These are the reason that untreated wool itches when worn next to skin.  So the next step is to remove the scales, which also shrinkproofs the wool.  Shrinking/descaling is done using a chlorine pretreatment sometimes combined with  a thin polymer coating.  (Fleece is soaked in tertiary amyl or butyl hypochlorite in solution and heated to 104° for one hour.   The wool absorbs 1.5% of the chlorine. [2] )   These treatments make wool fibers smooth and allow them to slide against each other without interlocking. This also makes the wool feel comfortable and not itchy.

Unfortunately, this process results in wastewater with unacceptably high levels of adsorbable organohalogens (AOX) – toxins created when chlorine reacts with available carbon-based compounds. Dioxins, a group of AOX, are one of the most toxic known substances. They can be deadly to humans at levels below 1 part per trillion. Because the wastewater from the wool chlorination process contains chemicals of environmental concern, it is not accepted by water treatment facilities in the United States. Therefore all chlorinated wool is processed in other countries, then imported.[3] (For more about chlorine, go to the nonprofit research group Environmental Working Groups report about chlorine, http://www.ewg.org/reports/considerthesource.)  There are new chlorine free shrink/descaling processes coming on the market, but they’re still rare.

Finally, there is the weaving of the yarn into fabric – and all the environmental problems associated with conventional weaving and finishing.  In addition to the environmental concerns associated with conventional weaving, dyeing, and finishing (see some of our earlier blog posts), wool is often treated for moth and beetle protection, using pyrethroids, chlorinated sulphonamide derivatives, biphenyl ether or urea derivatives, which cause neutrotoxic effects in humans.

In the last 10 years, the textile industry,  along with animal ethics groups like People for the Ethical Treatment of Animals,  have lobbied against the wool industry, taking a stand against unethical treatment of sheep. In 2004, U.S. retailer Abercrombie and Fitch became the first to sign on to an animal rights campaign boycott of Australian wool that stood firmly against the typical practices of mulesing (where folds of skin around the sheep’s anus are cut off with shears during the wool shearing) and live export of sheep to halal butchers when their wool production becomes minimal.  Other companies such as H&M,  Marks & Spencer,  Nike, Gap,  Timberland, and Adidas (among others) have since joined, sourcing wool from South Africa or South America (where mulesing is not done).  The result of this outcry has led to the increased production of both organic and ethical wool, though it is still relatively minor when compared to the overall global wool production.

To complicate things a bit more, each country maintains their own standards for “organic wool” – Australia, for instance, has no equivalence or agreement with US organic standards.  The International Wool Textile Organization (IWTO) has adopted a new organic wool standard (closely aligned with GOTS) which they hope will be accepted by its members.  In addition, many companies use the term “eco wool”, which means the wool is sheared from free range roaming sheep that have not been subjected to toxic flea dipping, and the fleece was not treated with chemicals, dyes or bleaches – but this is wide open to interpretation and exploitation.  According to the IWTO, “Eco wool” must meet the standards set by the EU Eco-label.

Wool is a fabulous fiber – in addition to its many other attributes, it smolders rather than burns, and tends to be self-extinguishing.  (Read what The Commonwealth Scientific and Industrial Research Organisation (CISRO), Australia’s national science agency,  has to say about the flame resistance of wool by clicking here:   http://www.csiro.au/files/files/p9z9.pdf )  So if you can find organic wool  – making sure, of course, that the term “organic” covers:

…then go for it!  Nothing is quite like it in terms of comfort, resilience, versatility and durability.

But first you have to find it.  And that means you’ll have to ask lots of questions because there are lots of certifications to hide behind.

18 thoughts on “What does organic wool mean?”