And climate change is upon us.  I’m sitting in Seattle experiencing an “historic heat wave” while reading that the Hadley Center of the British Meteorological Organization has said the world’s temperature will increase by 8.8 degrees F rather than 5.8 degrees F this century.

The Inter-Governmental Panel on Climate Change (IPCC) has said we can expect a considerable increase in heat waves, storms, floods, and the spread of tropical diseases into temperate areas, impacting  the health of humans, livestock and crops. It also predicts a rise in sea levels up to 35 inches this century, which will affect something like 30% of the world’s agricultural lands (by seawater intrusion into the soils underlying croplands and by temporary as well as permanent flooding). If the Hadley Center is right, the implications will be even more horrifying: Melting of the Antarctic, the Arctic, and especially the Greenland ice-shields is occurring far more rapidly than was predicted by the IPCC. This will reduce the salinity of the oceans, which in turn  weakens (if not diverts) oceanic currents such as the Gulf Stream from their present course . And if that continues, it would eventually freeze up areas that at present have a temperate climate, such as Northern Europe.

According to the Institute of Science in Society, “It is becoming clear that climate change and its different manifestations (as mentioned above) will be the most important constraints on our ability to feed ourselves in the coming decades. We cannot afford to just sit and wait for things to get worse. Instead, we must do everything we can to transform our food production system to help combat global warming and, at the same time, to feed ourselves, in what will almost certainly be far less favorable conditions.”

But before we tackle the question of how best to feed ourselves during these “less favorable” times: how can organic agriculture help with global warming?

It’s generally assumed that various Greenhouse Gases (GHG) are responsible for
global warming and climate change.   On a global scale, according to a study commissioned by IFOAM, agriculture has been responsible for approximately 15% of all GHG emissions:

Initially forests were thought to be the most efficient way to sequester (or absorb) this carbon.  It was thought that escalating fossil fuel consumption could be balanced by vast forests breathing in all that CO2.   But  these sinks, critical in the effort to soak up some of our greenhouse gas emissions, may be maxing out, thanks to deforestation, and human-induced weather changes that are causing the oceanic carbon dioxide “sponge” to weaken.

The Rodale Institute Farming Systems Trial (FST), launched in 1981, is a 12 acre side by side experiment comparing three agricultural management systems: one conventional, one legume-based organic and one manure-based organic.  In 23 years of continuous recordkeeping,  the FST’s two organic systems have shown an increase in soil carbon of 15 – 23%, with virtually no increase in non-organic systems. 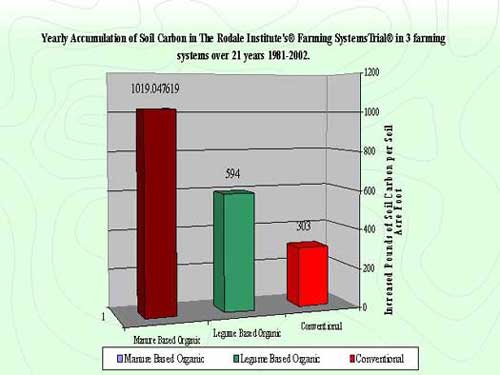 But although it is well established that organic farming methods sequester atmospheric carbon, researchers have yet to flesh out the precise mechanisms by which this takes place.   One of the keys seems to be in the handling of organic matter – while conventional agriculture typically depletes organic matter, organic farming builds it thru the use of composed animal manures and cover crops.  In the FST, soil carbon levels increased more in the manure-based organic system than in the legume-based organic system, presumably because of the incorporation of manures, but the study also showed that soil carbon depends on more than just total carbon additions to the system–cropping system diversity or carbon-to-nitrogen ratios of inputs may have an effect. “We believe that the differences in decay rates [of soil organic matter] have a lot to do with it,” says Hepperly, since “soluble nitrogen fertilizer accelerates decomposition” in the conventional system.

The people at Rodale put the carbon sequestration argument into an equivalency we can all understand: think of it in terms of the number of cars that would be taken off the road each year by farmers converting to organic production.  Organic farms sequester as much as 3,670 pounds of carbon per acre-foot each year. A typical passenger car, according to the EPA, emits 10,000 pounds of carbon dioxide a year (traveling an average of 12,500 miles per year). Here’s how many cars farms can take off the road by transitioning to organic: 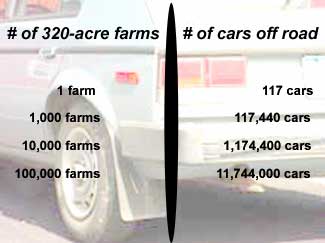 U.S. agriculture as currently practiced emits a total of 1.5 trillion pounds of CO2 annually into the atmosphere. Converting all U.S. cropland to organic would not only wipe out agriculture’s massive emission problem, but by eliminating energy-costly chemical fertilizers, it would actually give us a net increase in soil carbon of 734 billion pounds.

Organic agriculture is an undervalued and underestimated climate change tool that could be one of the most powerful strategies in the fight against global warming, according to Paul Hepperly, Rodale Institute Research Manager.  In addition to emitting fewer GHGs while sequestering carbon, organic agriculture uses less energy for production.  A study done by Dr. David Pimentel of Cornell University found that organic farming systems used just 63% of the energy required by conventional farming systems, largely because of the massive amounts of energy requirements needed to synthesize nitrogen fertilizers.

Taking it one step further beyond the energy inputs we’re looking at, which help to mitigate climate change, organic farming:

Organic production has a strong social element and includes many Fair Trade and ethical production principles.  As such it can be seen as more than a set of agricultural practices, but also as a tool for social change.[3] For example, one of the original goals of the organic movement was to create specialty products for small farmers who could receive a premium for their products and thus be able to compete with large commercial farms.

And actually, it seems that modern industrial agriculture is on the way out.  The Food and Agriculture Organization of the United Nations (FAO) admitted in 1997 that wheat yields in both Mexico and the USA had shown no increase in 13 years  – blamed on the fact that fertilizers are becoming  less and less effective, as are pesticides.   The farmers are losing the battle.  Conventional agrochemical use (which includes many highly toxic substances) also has many immediate human impacts:  documented cases of short term illnesses, increased medical costs and the build up of pesticides in human and animal food chains.  The chemicals also contaminate the drinking and ground water.  And industrial agriculture is far too vulnerable to shortages in the availability of fuel and to increases in the price of oil.

That’s a lot to think about when looking for your next T shirt, so before you plunk down your money for another really cool shirt,  think about what you  will be getting in exchange.

[1] I should point out that although “sinks” in vegetation and soils  have a high
potential to mitigate increases of CO2 in the atmosphere, they are not
sufficient to compensate for heavy inputs from fossil fuel burning.  The long-term solution to global warming is simple:  reduce our use of fossil fuel, somehow, anyhow!
Yet the contribution from agriculture  could buy time during which
alternatives to fossil fuel can take affect – especially if that agricultural system is organic.